Longyearbyen Camping is situated at 78º 15´ North. To the geographic North Pole, it is just another 1300 km. Even Thule in Greenland is further south, and the Arctic Circle is for us about as far south, as it is north from central UK. Still, you may get a lot of sun hours with us in summer. The area of the campground comprises ca. 30,000 m², mostly flat tundra on a coastal plain, which was lifted above sea-level by post-iceage land rise. Even today, old beach lines and stones rounded in the breaker zone of former beaches are still visible on and above the campingsite, and you may stumble occasionally even over rotten whale bones, stuck in the ground for thousands of years (please do not change anything). An old beach wall all across the campground is the first area which falls dry during snow melt, suitable for early guests for setting up their tents.

Getting to Longyearbyen (and back)

Longyearbyen is primarily accessible from Norway with scheduled flights from Oslo and Tromsø by SAS and Norwegian, on average twice a day during most of our season. 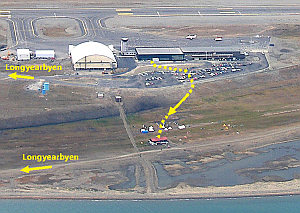 Once you have reached Longyearbyen, the northernmost regular airport of the world, it is not far to us anymore. It is about 300 m from the airport parking, down a steep track to Longyearbyen Camping. It is situated on the tundra, directly next to a bird lagoon. Pleasantly close, especially when arriving tired on a night flight - but also for last minute departures, when it becomes hard to say farewell to this grand scenery. At the same time, the number of flights per day is low - and thereby also the noise.

From the campsite to Longyearbyen

Distance from the campsite to the center of Longyearbyen is about 4 km (2.5 miles). The tarmac airport road and the gravel coastal road meet a few hundred metres to the left (East) outside the picture. From there, you follow the tarmac road along the shore towards the already visible settlement, \you can do this either on foot, on a rental bike, using one of the airport busses (operating only in connection with flights), or by taxi or rental. In summer and with good visibility, the shore road is reasonably safe also without a gun. 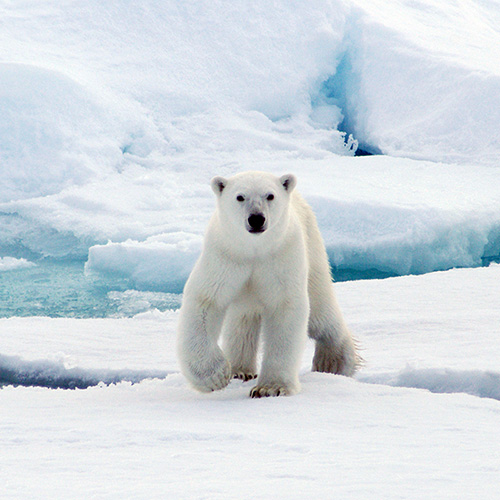 As a principle, each user of Longyearbyen Camping is responsible for his or her own safety. Due to fairly open terrain, permanent light, occasional traffic on the nearby coastal road at any time of the day and also almost always some activity on the campingsite itself, an undetected approach of a polar bear is very unlikely during most of the summer season. During the summer season, Longyeabyen Camping hosts on average 30 guests/night. Therefore, in summer time guests abstain from having fire-arms and firework-alarm system ready on the camping-site in summer – in view of the risk of injuries caused by these safety equipment items.
Since 2021 Longyearbyen Camping operates with an electric fence, for your and our safety. In addition we also have two guard dogs at the sea side.

Firearms on the campsite: all over Spitsbergen, firearm owners are expected to have their weapons and ammunition safely locked away when not using or carrying them. This can be difficult for campsite guests. A minimum measure is to remove the bolt and ammunition and take them with you to make the rifle unusable (precaution against playing children, curious other persons, etc.!). Firearms are not to be taken into the public areas of the service building. No loaded guns anywhere on the campsite.

In periods where there is partly real darkness, white terrain or also more fjord ice (at least some of these aspects are the case from end of summer to late spring), the appearance of a polar bear also near Longyearbyen is either more difficult to detect and/or a bit more likely. Although we recommend you to stay in town, you are welcome to camp yourself, but the building is closed and there will be no facilities, so no electricity nor water. In these periods, campsite users have to take appropriate safety measures.

Camp alarm systems on the campsite: This is more an issue from end of summer to late spring (see previous passage). Again, you have to make sure that your alarm system cannot cause damage or injury to others - including unattentive or curious persons (also children), dogs, etc., triggering your alarm unintentionally or playfully.

Out on tour in the wilderness, the situation is quite different also in summer: when camping there, both alarm system for the tent and a suitable gun (plus good marksmanship with that gun) are a must, because out there, there is nobody else who could discover a bear before it is close.