The Spitsbergen archipelago became Norwegian on the basis of the Spitsbergen Treaty only in 1925 (before it was no man's land) - but with a special status, which guarantees equal rights to all citizens of the treaty countries, the use of natural resources and the absence of military bases.

Ca. 63000 km² between 74° and 81° N, distance from northernmost point Ross Island (Rossøya) to North Pole is about 1000 km, and the southernmost point South Cape (Sørkapp) is about 1000 km southwards to the North Cape of mainland Norway. Due to the extreme northern position, the sun does never set from April 20th to August 24th (midnight sun, polar day), while it never rises between October 28th and February 16th (polar night).

60 % of the land mass is covered by ice and the soil is frozen deep down all year round (permafrost), except of a thin active layer on top, which melts up during summers. Only 10 % of the land surface are covered by dense tundra vegetation. Wildlife: about 10,000 wild reindeer, 3000 polar bears, and an unknown number of polar foxes, walruses, seals and masses of birds in summer. During summer, the snow melts away completely in the lower parts and the sensitive tundra vegetation has just a few months for growing and flowering.

The average temperature in summer is not below freezing point, but still < 10ºC. When it is wind still and sunny, you can find yourself a nice spot in the sun and relax. Unfortunately, this happens not very often. Most of of the time it is very windy and the wind chill factor makes it really cold. For camping you need a wind stable tent! Also sleeping-bag manufacturer informations are sometimes quite optimistic. Therefore, a sleeping-bag, which is good down to -10° C according to the producer, should be sufficient even for possible minimal frost. Please note: The sun does not set from April 19. - August 24. If you have difficulties with sleeping when light, we recommend to bring a sleeping mask.

Spitsbergen is mainly pathless Arctic wilderness, and the few tiny isolated settlements and stations have no connecting roads or tracks. Of the ca. 3000 inhabitants on the archipelago, ca. 2500 live in the Norwegian "capital" Longyearbyen (due to the Spitsbergen Treaty, ca. 40% is non-Norwegian), which boasts also with the main airport, administration and an excellent infrastructure. Main activities: mining, research, education, administration, tourism, small businesses. The Russian settlements are Barentsburg (mining, tourism & research) with about 400 inhabitants and deserted Pyramiden where now only 12 people live. Ny Ålesund is focussed on Arctic research (climate, weather, aurora). In summer up to 300 international researchers live here. Furthermore, the Polish research station in Hornsund is manned yearround.
Even around the settlements, pathless wilderness starts right behind the last houses.

Access first of all by scheduled flights between Oslo/Tromsø/Helsinki and Longyearbyen. Within the archipelago, there are no roads, railways or tracks between the few settlements, and no general scheduled transport. In summer, there are some day cruises to the other settlements/stations in Isfjord - provided sufficient number of bookings. 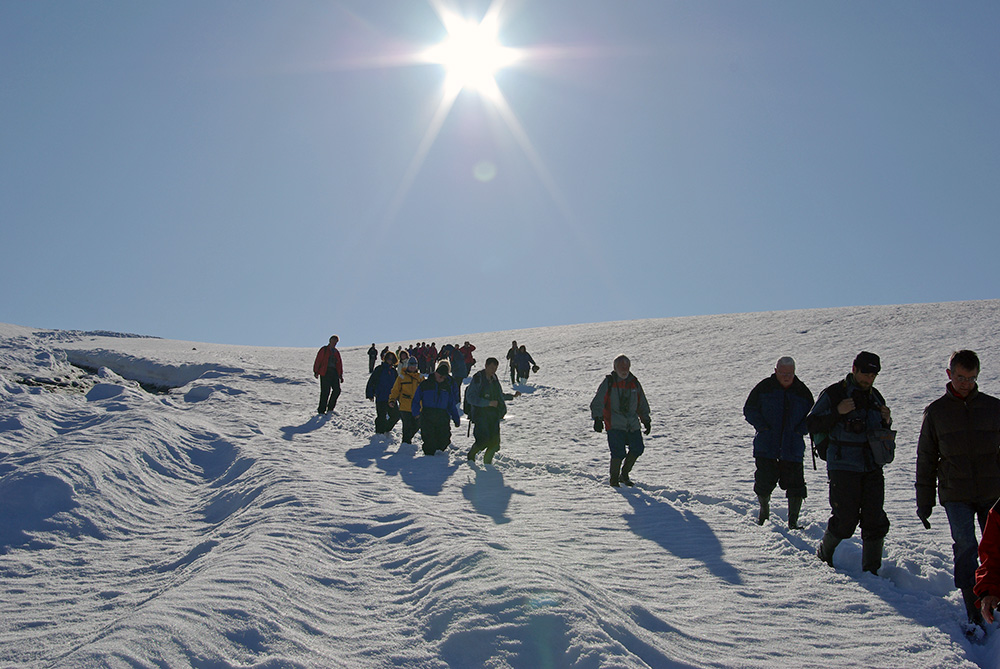 In summer: hiking, paddling and cruises. In winter/spring: skiing, sledging, skidooing. No tracks outside the settlements, no generally accessible cabins, etc. Very strict environmental legislation, including a complete ban on touristic use of aircraft. Due to the lack of infrastructure, almost all tourism takes place via specialised tour operators who provide their own infrastructure for their guests. Tours to more remote areas require a special permission and an insurance covering search and rescue operations.

Please note: You are not allowed to leave the settlements without a gun. You can get a weapon license via the Sysselmann.